A Tribute to the Founders’ Contribution to Omega Psi Phi 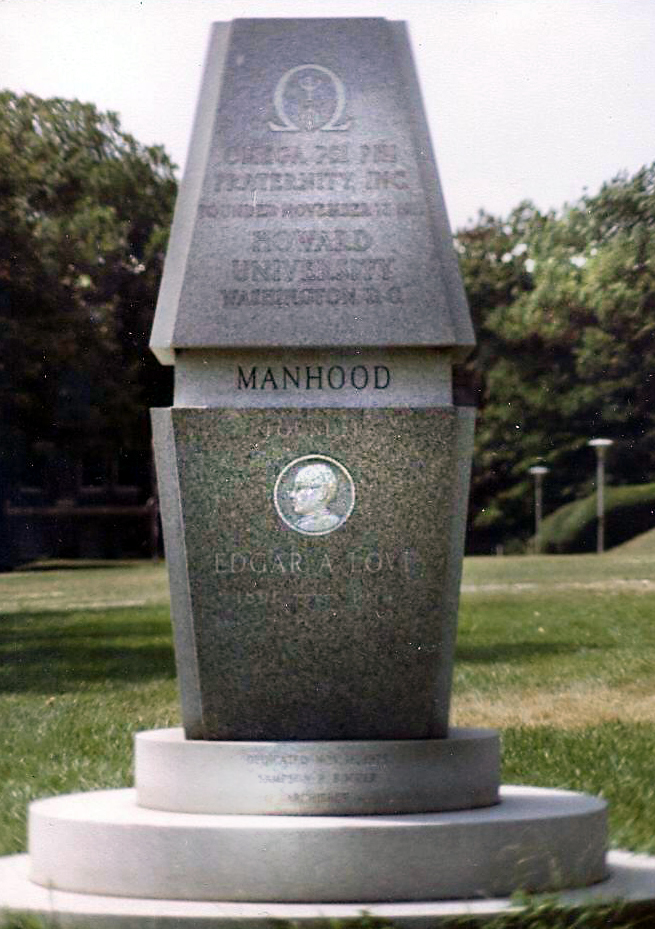 The idea for a monument came from Enoch Perry in 1973, a member of Kappa Psi Chapter. He discussed his idea with Kenneth Brown, also a member of that chapter, who pulled in three Alpha Omega members: the late H. Carl Moultrie, the national executive secretary; the late Ernest Mercer, the chapter’s basileus; and Frank Patterson. Perry said the idea for a monument came to him after the 1972 death of Founder Oscar J. Cooper. Perry said that with only one founder still alive—Founder Edgar A. Love—the Washington Chapters of Omega needed to do something in tribute to the founders’ contribution to Omega Psi Phi.

The committee members decided that such a project should have a national rather than solely local focus, and Moultrie told Brown and Patterson that he would arrange for them to be on the agenda of the Supreme Council to raise the proposal for a national memorial.

In preparation for that meeting, the committee got Brother Samson P. Boozer, an architect major at Howard University, to design such a monument. Patterson said the committee wanted a student member of the organization to design the monument, as they wanted to ensure wide participation in the project.

Once he had Boozer’s rendering of the proposed monument, Brown went to Falvey Granite Memorials, a maker of tombstones, at 2nd and Upshur Streets, N.W., and also contact granite companies. The granite companies, however, referred Brown back to Falvey, saying the committee would have to deal directly with that company, while Falvey’s would deal with the granite manufacturers.

Armed with the architectural drawings and price quotes from Falvey Granite, Brown and Patterson went to a meeting in early 1974 of the Supreme Council. While they had expected widespread acceptance of the proposal, they encountered a resistant council, led by Grand Keeper of Finance Clifton Moore, who raised concerns about where the organization would get the funding for such a project.

Brown said he remembers that the two supporters on the Supreme Council were Brothers Oscar Turner and Edgar Burnett, something he said Burnett still kids him about.

While Brown said he felt the project was dead at this point, Moultrie pulled he and Patterson aside to tell the next plan of action. Moultrie instructed Patterson to draw up a budget proposal and submit it to the National Budget Committee for presentation at the Phoenix Grand Conclave, scheduled for summer 1974. The Budget Committee at that time was chaired by the late Brother Wendell Morgan, who at that time was also a member of Alpha Omega Chapter.

Patterson, based on the estimates from Falvey, put together a budget proposal of $15,000 for a national monument. That line item was included in the budget presented by Morgan’s committee to the Phoenix Grand Conclave for the fraternity’s next budget year. When the Grand Conclave accepted the total budget proposed by the committee, it was also accepting the line item on a national monument.

Moultrie had done a lot of work behind the scenes. He had told a number of members of the Supreme Council that the budget proposal for a national monument would be coming to the conclave floor. He had also alerted other brothers around the country of the plan, in order to win them over.

When Clift Moore found out that one of the items approved as part of the budget at Phoenix was for a national monument, he was incensed, Brown and Patterson said. Again, his concern was where would the fraternity find the money for such an item. However, Grand Basileus Marion Garnett told him that the Grand Conclave—the fraternity’s highest governing body—had approved the monument, and Moore had to find the money to carry out its order.

After seeing the architect’s drawing of the obelisk—a, tall slender, four-sided monument, with a rendering of a different founder on each of the four sides—the committee decided to pick a gray granite on a concrete base. It choose gray granite rather than purple, Patterson said, because “it looked more classy and rich than the purple,” which also had a pinkish tinge to it. “We decided that the fraternity’s colors didn’t have to be used for the monument.”

Patterson said he remembers his visit to the granite sight in Burlington as though it were yesterday. “I had to fly to Buffalo on a jet and then take a six-passenger plane from there to Burlington. It was so small I couldn’t stand up in it.”

Patterson, as he flew into Burlington, saw the beautiful granite mines in the region. The company had completed work on the monument—or so it thought. Patterson looked it over carefully, being awed at its beauty, until he came to a mistake. The stone carver had spelled “perseverance”—one of the fraternity’s cardinal principles—wrong, spelling it as “perserverance.” The stone carver had to smooth down the four sides of the entire monument and re-carve them in order to fix this mistake.

Carolina Panthers fans make sure you stop by Concession stands 543 & 544 today at @BOAStadium for all of your refreshment needs during todays game against the Broncos. @TheMighty6thD @OfficialOPPF pic.twitter.com/dqHkArGksv

About a week ago from Kappa Alpha Chapter's Twitter

Give if you can 🙏🏾 pic.twitter.com/yNzznW2GoQ

No upcoming events at the moment